we got to the (i stopped writing), we stop now again i thought that now the Serbian side!!! i was wrong because the first stop it just was the enter to Bulgarian–Serbian border area!! this one now the bulgarian side, we all in the bus hop off went to put stamps to check out the country, i was the first one! mine it wasn’t passing by the electronic machine, he tried few times it doesn’t work (its like scanning passport machine), he said to me stop beside and to let others to pass, fine, after all he went call somebody both of them came to me, the one that came with start to ask where i’m going and why? i’m traveling and going to belgrade, ok fine have a good trip!!! hop on the bus again to the serbian side now!

the Serbian police enter the bus, i was the first one to take from the passport, he says “Israel!! aha “ and again the same question like at the Bulgarian side, he took the passport and returned after 15 minutes, the bus drive close the door and just starts driving passing the border!! I’m in Serbia i said!!

A big smile on my face, relaxed, calmed down after a long breath i holed it till this moment to be passing the border!

i hold it for three hours since i get to the international bus station in Sofia directly after my flight from Tel-Aviv, all the signs in Bulgarian didn’t understand nothing the people also hardly speak English, i just and randomly an office and asked for a bus to Belgrade, she said “yeah there is one leaving in like one and half hour, give your passport to add you if you want”, i gave her, she was looking at passport page after page she said “you are Israeli and you need a visa !!” i tried to tell her the no i don’t need!! few of my friends already visits there and they didn’t told that they did visa!! no you need a visa she said again !! ohh okay can you call the embassies and to check with them i said, i was totally in shock both of them says yes i need a visa!! i said so what i have to do, you need to go to the Israeli embassy and it will just be open in two days !!
i just went out of this office i didn’t give up i feel something wrong here! just few steps i entered another office i told the issue, she said “don’t worry its gonna be alright” she checks at at document that she has at the computer and its written under Israel “no need”, i bought the ticket i was half happy half worried, until i passed the border.

When we just crossed the border, one of the drivers started to make like cigarette shop with some passengers at bus, i didn’t understand that much the situation because they were talking all time Bulgarian, but for me it was funny and remind me of my bus driver that i had while guiding a group in Croatia and Slovenia a month ago, when we each time arrived to a border checkpoint, always he said when a bus stucked or just turned around: “Bulgarian are very problematic always hiding somehow something”, i think its explain enough what was going here at the bus after we pass the border.

around 21:00 i arrived to the hostel, located in the center or as i saied at the heart of the city “downtown central hostel” called, very new, great staff, and nice. chat with few people here took a shower and just pick up myself to go out, after walking and eat something i end at a entrance of place don’t know yet the name i will check it out later, i started to chat with others, they accept me very nice to be with there company and just enter inside with them, inside was a Serbian live songs, a small band, smoky place, few drinks and just back to sleep to get ready for tomorrow. 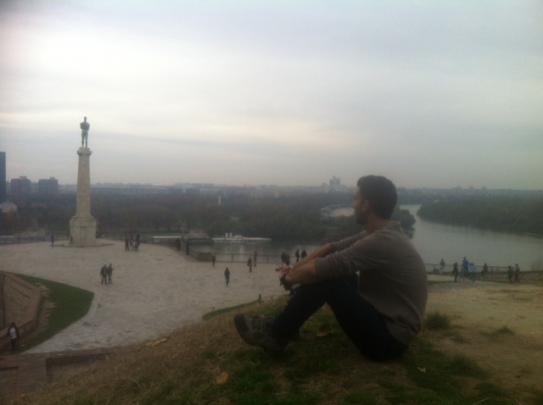 about today (12/11/14) meeting people and chatting with them, will comes later

One thought on “I’m gonna stay in Belgrade 4 nights more :)”